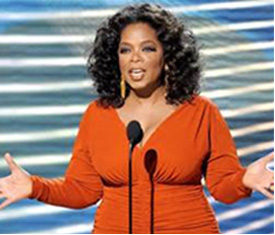 “I swear, and it’s the one thing that I really don’t like about myself. Jim O’Connor teaches people how to stop swearing. I agree that swearing is terrible and I’m going to quit.”
--Oprah Winfrey

“It’s easy to think positively about O’Connor. He’s funny and he’s touched a nerve with a lot of people. And it all makes sense, doesn’t it? Who can argue with a plea for a return to civility?”
--The Reader’s Guide

CUSS CONTROL,
The Complete Book on How to Curb Your Cursing

The real problem with profanity is not the words, but the negative or hostile tone the usually accompanies them. The book focuses on how to communicate effectively and with civility. CUSS CONTROL was a media sensation, and Jim and Lynda O’Connor won three awards for the best book publicity for 2000, the year it was published. Over a period of several years, Jim appeared on more than 100 TV shows and news programs. He was featured in more than 500 newspapers and magazines, and interviewed on more than 700 radio stations in seven countries.

The simple life of home organizer Ted McCormick is about to explode. He is hired by a man who is convinced his eccentric father died leaving something of great value hidden in his cluttered and mysterious Victorian mansion. Something—or someone—in the house is preventing him from finding it. A devoted husband, Ted struggles to resist the charm and seductive flirtations of another client, a divorced mother. Her jealous ex threatens Ted and his wife grows suspicious. The two plots merge and the surprise ending captures the imagination of the city and makes national news.